Windows Live Mail Bug That Microsoft Might Not Ever Fix…

in Tech - on 2/14/2014
By: Rajat Gaur
Windows Live Mail is a popular Email client offered by Microsoft as a part of its Windows Essentials suit. Microsoft seems to be quite reluctant about the email client. Windows Moviemaker and Windows Photo Gallery are perhaps the only programs in the Windows Live Essentials Suit that Microsoft really cares about. 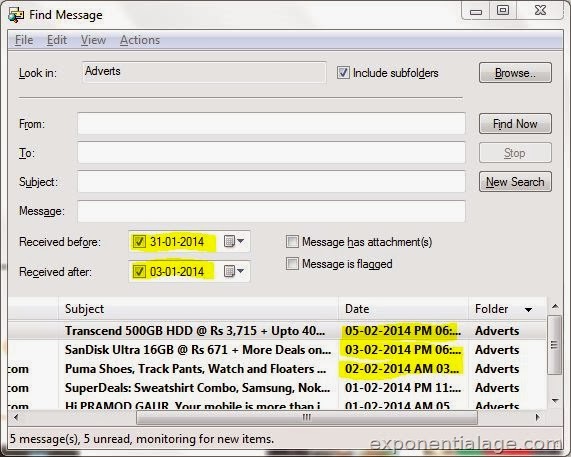 For example if you search for an email received between two given dates today, you’ll see a list of all emails received till today since a date chosen arbitrarily by Windows Live Mail. (You can try it yourself !)

As you can see in the screenshot, I was trying to find an email received between January 3 and January 31, but Windows Live Mail is showing me a list of all the emails that I had received till 5th of February (the screenshot was taken the same day). When I searched Microsoft Answers Community for this issue to make sure that it’s a bug, I found that a few others have also come across the issue and have complained about it in the community.
I think Microsoft might not ever fix this bug as Microsoft seems to be ignoring Windows Live Mail since quite a while. Rumor has it that Microsoft might even discontinue Windows Live Mail. I can’t tell what Microsoft is going to do but almost everyone will agree that it is quite surprising that a company of repute of Microsoft has been unable to fix such an obvious bug like this.