in Tech - on 2/25/2014
By: Rajat Gaur
Nokia has tried to create a cocktail of Microsoft's Web Services, Nokia's own hardware (and a few services as well) and Android's Flexibility with the release of three of its X series smartphones in the Mobile World Congress in Barcelona. Many other such X series phones aimed at emerging markets are also in the pipeline. 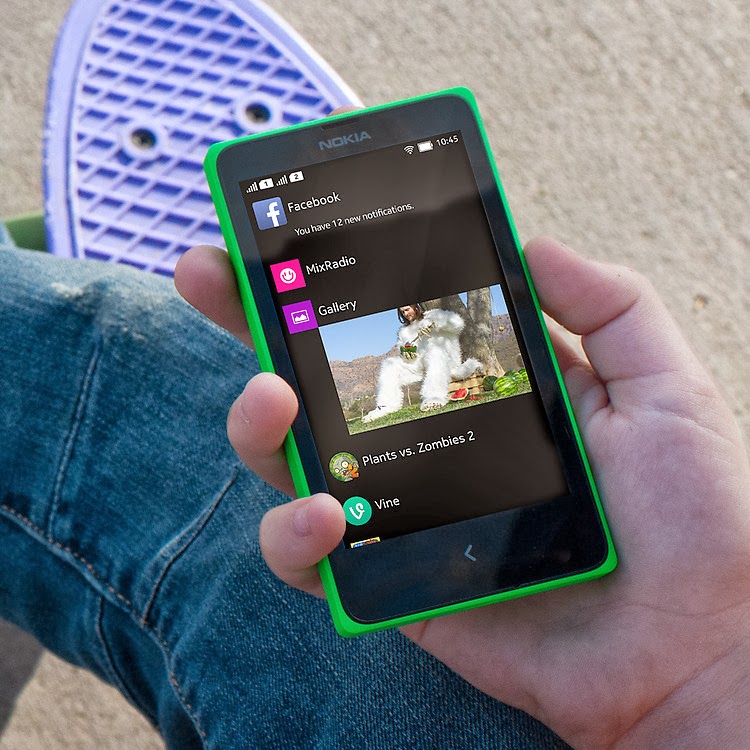 The three phones named Nokia X, X+ and XL are powered by Google's Android Open Source Project (AOSP). X and X+ are dual-sim (3G network supported) phones with 4 inch 480x800 screens powered by 1 GHz Qualcomm Snapdragon S4 processor and have 4 GB of internal storage. The two phones differ only in terms of RAM. Nokia X has 512 MB RAM while X+ comes with 768 MB of RAM. Both the phones also have an identical 3 MP fixed focus rear camera and no front camera (which is actually a big hardware goof up by Nokia).Nokia XL is a slightly higher end smartphone which sports a 5 inch display (resolution being same as X and X+), a 5MP rear camera and a 2 MP front camera. Other tech specs of XL are same as those of X and X+. Nokia seems to have priced three of these phones quite aggressively. The official prices of X, X+ and XL are 89 Euro (= USD 120 or INR 7500), 99 Euro (= USD 135 or INR 8500) and 109 Euro (= USD 150 or INR 9300) respectively. You can read Tom Warren's first review of the three X series phones here. He describes Nokia's X series phones as a collide of Android and Windows phones.

While one may consider these X series phones a good upgrade from Nokia's own Asha platform, these phones are certainly not for Android obsessed geeks like me. The biggest reason is obviously the unavailability of the Google Play Store. What you have as a replacement is Nokia's own store for its X series phones, where although you may find some of the popular Android apps, many others, Instagram for example, are not available there. While you can make up for the lack of Play store for most of third party apps (including Instagram) that you expect a regular Droid to run, by sideloading them from third party app stores like 1 Mobile Market, Google Apps like Gmail and Google Drive still do not just work (however Chrome browser for Android works with these X series phones and same is also available at 1 Mobile Market.). So you have to rely on Microsoft services like Onedrive and Skype (you even get free unlimited worldwide Skype calls for one month). Even for search, Nokia has chosen Bing as the default search engine just the way it did in Lumia devices. But unlike Lumia, here you can not install the official Google Search app. You also get a feature called Fastlane which Nokia has ripped off from its own Asha OS. It shows all your notifications in a timeline view.

So what kind of market is Nokia trying to target? A trivial guess suggests Nokia is perhaps trying to bridge the gap between its Asha series and the Lumia series and using these X series phones as a bait to attract a user who uses a budget Android device. Nokia has also tactically designed the UI of these X series phones very similar to Windows Phone 8 Metro UI so that its users get used to the tiled interface and therefore consider an upgrade to Windows Phone 8 (and Lumia is the obvious option in Windows Phone 8 regime). But there is a flaw in this strategy. People like me who are over obsessed with Android and Google apps and services will certainly not even consider these devices (or any device running on forked Android for that matter). Those who are not really huge fans of Android but prefer it over Windows Phone 8 just because of the vast ecosystem of apps that it offers (whom Nokia is probably targeting), might also find it difficult to bet on these devices because they do not come with the Play store which is the window to the world of apps; and installing apps by sideloading from third party app stores is a process a bit too geeky for these users (almost all geeks fall in the first category and will always prefer a pure Android experience with all the Google apps and services).

What Nokia should have done instead is it should have retained the Play store and the ability to run all the Google apps. The Windows Phone 8 like tiled UI is fantastic and the combination of Android (I mean real Android), tiled interface and Nokia services like Here Maps, Mix Radio, etc. could have done wonders for Nokia. But it seems like Nokia just missed the bus. So if you are out there to buy a new smartphone with a budget in the range of 150 and 250 USD (i.e. between INR 10000 and 15000), my suggestion would be Moto G (which gives you a pure Android experience), unless you are a huge fan of Nokia's hardware and are using your Nokia 3210 (which you probably bought sometime in 1999 or 2000) till this date !